So the last few months have been a little rocky for some of the systems. This was discussed in last months post.

Let’s tick a few of those off:

1. All is well and working as it should.

2. As blogs #2 & 3 suggested, these are unprecedented times with fluctuations in performance affecting all followers of the Sport of Kings. All we can do is be aware, be pro-active and be open to looking at new angles that may appear.

3. I’ll be honest that my personal commitments this month have not allowed me to explore the new Z-Test variables in as much detail as I normally would. However, it is a welcome addition to the armoury as I have experience of such data sets when controlling and calibrating in the chemical industry.

These I am sure will feature prominently in my own future systems. A few new presets were added during April which use the Z-Tests. These are marked as ‘On Trial’ for now. Let me emphasise that the current presets are provided as guides to what is possible. Most require a degree of tweaking to make them work all year. Which brings us onto the Date variables. Day number and Month number have been added as criteria. The graphs below show two of the new systems RPR-Z1.5 which looks at all days and  RPR-Z1.5-WD which only uses data from Monday-Friday (Day <=5). 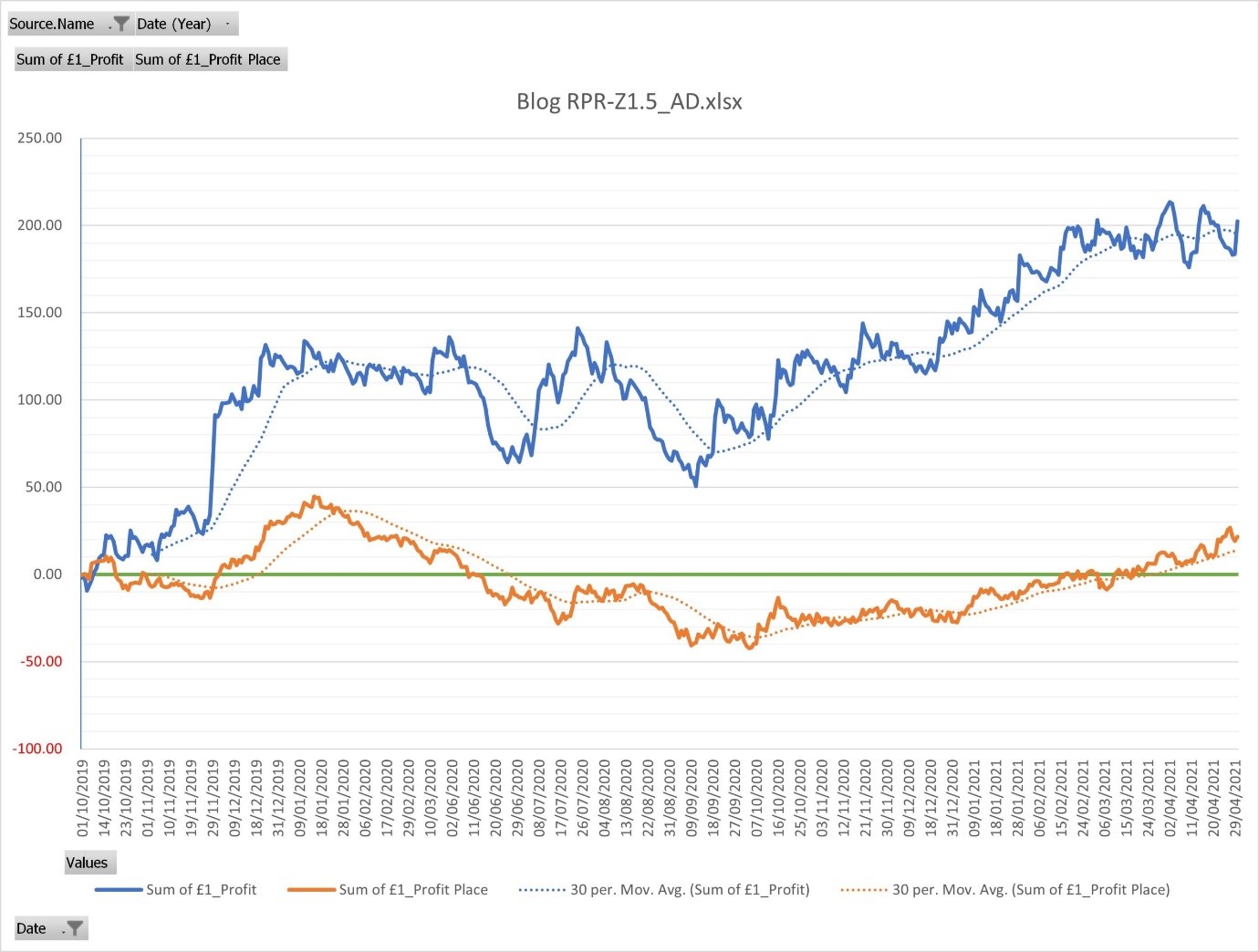 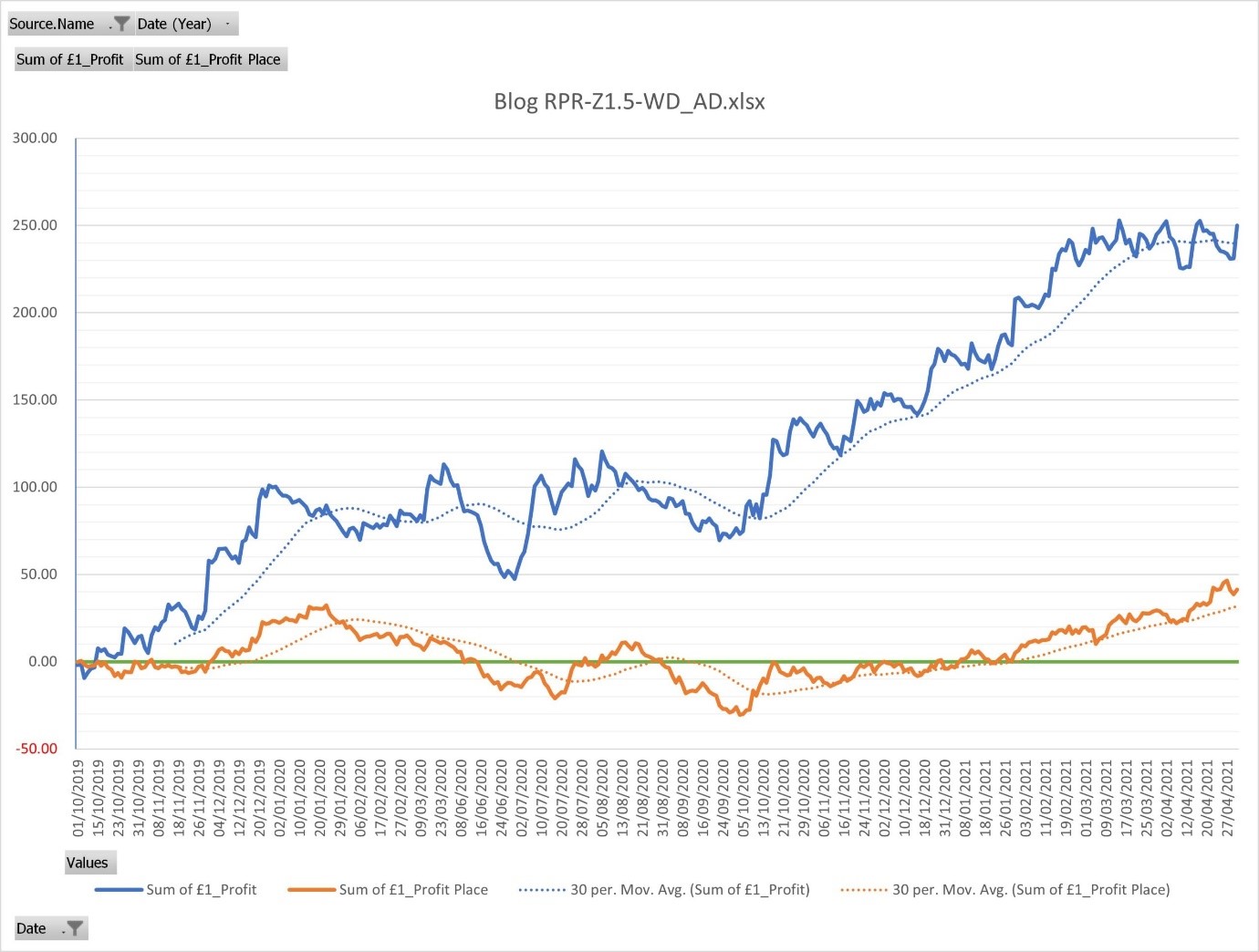 There is still some investigation to be done with these and any tweaks that you find and wish to share with other users are welcome.

4. The Time-based filters are a useful and quick look at whether a system is viable and /or may need a little further investigation. The way I use them is to look at a system with Even Months only then Odd Months only. It is usually easy to see if there is a major discrepancy between the two or not. For example, this shows all bets of a system 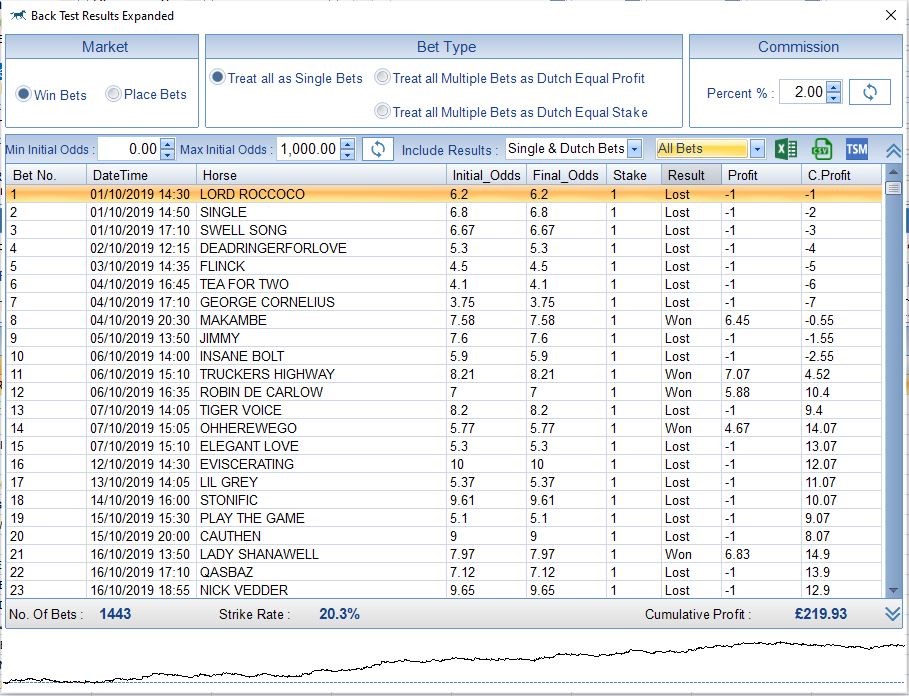 Here are the Even Months 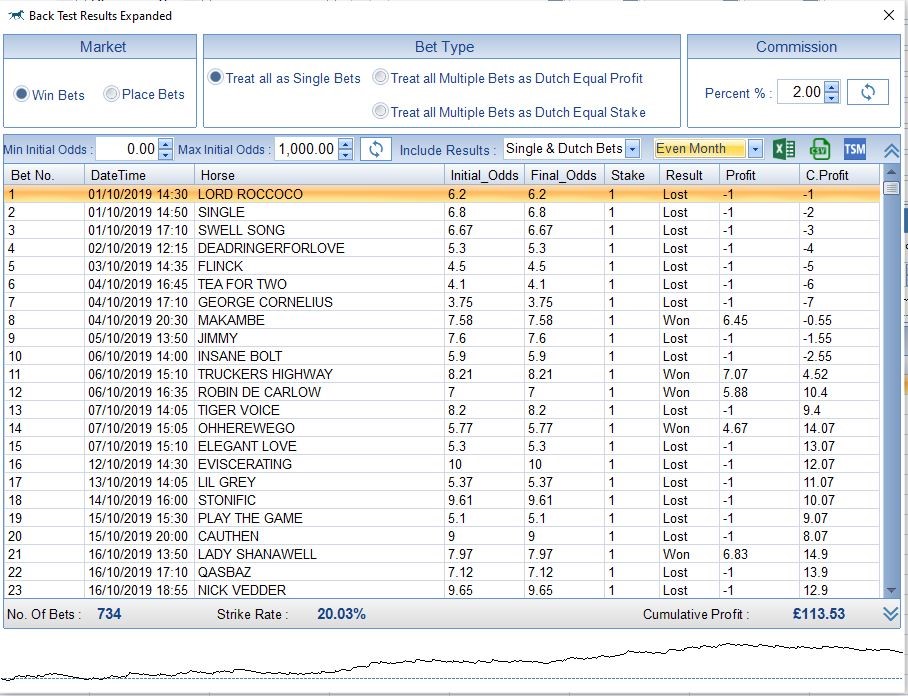 And the Odd Months 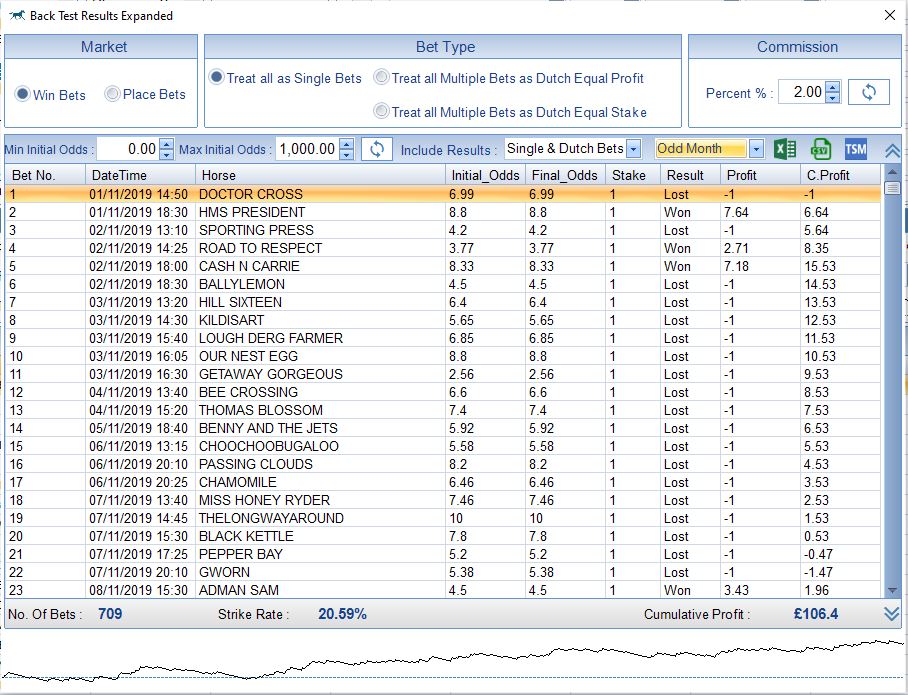 So you can see that the profit is split reasonably equally between Even and Odd months which suggest a degree of stability to the system. Of course, you have to be aware of what you are looking at and be careful of not interpreting skewed data: Last year’s data had a few months missing for example. Just check what you are looking at. Half Year, Quarters and Days are also there for use in a similar way.

I’m a bit of a fan of place betting: It’s always nice to find an outsider that when you look at the stats you know it’ll be in the mix at the post. So, the addition of Place Odds Filters for the back test is going to open up a range of tweaks to existing systems and options for new.

Have a play with it on an existing system to see how it works. You’ll have to tick the ‘Place’ box to turn the feature on.

Dave gave himself a bit of a sore head spending hours playing some of the new features the other day, but it was time well spent. I’ll add some detail of his findings in 6.

5. Sometimes systems just come to an end. Market forces can shift and remove a previously profitable edge or the industry variable morph and flux and introduce change.

Either way, some of the previously published presets are being ushered through the gate to a nice green field over the hill. If they come back to full strength we may see them again or they may produce some offspring which are stronger and more adaptable.

So ‘Agreement’ in its original form has gone from the list as has the original ‘Jumps’ and ‘Running Hot’.
This is the current list with data for the last 6 months for Win and Place. 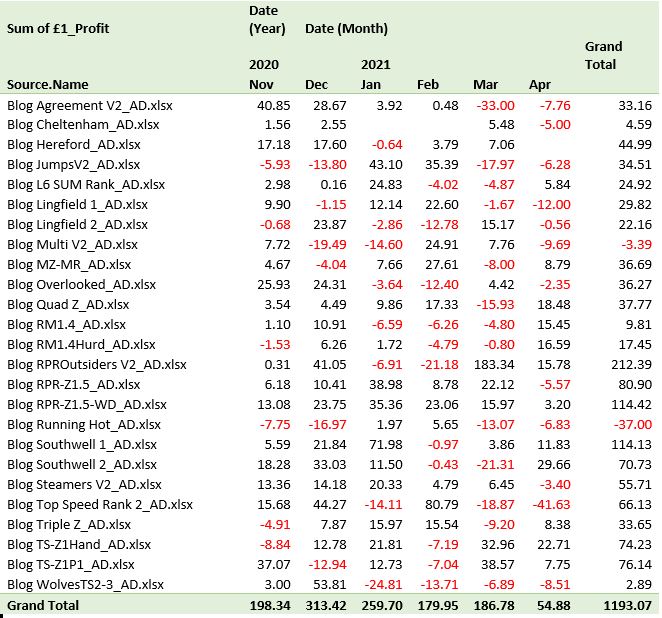 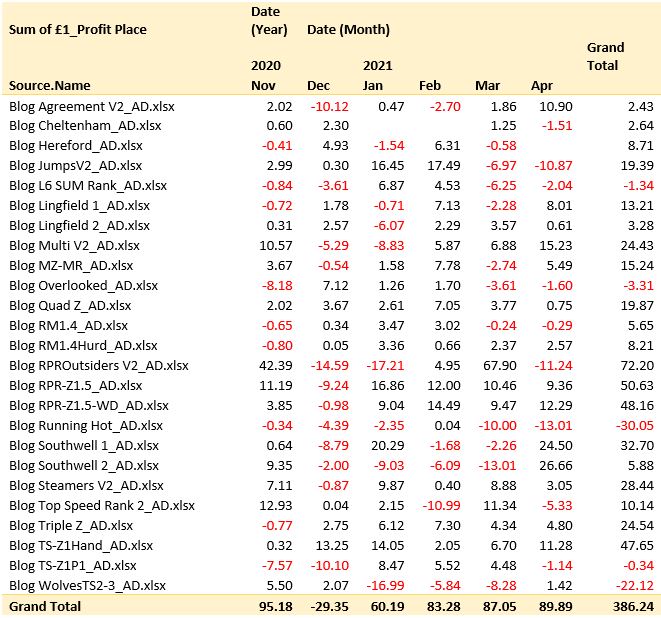 I’m not going to go into detail about them this time; I’m going to reserve my keystrokes for point 6 and cover system performance a bit more next time.

6. Workhorses: What we could all do with is a few systems in the portfolio that can be ‘passive’. We turn them on and come back at the end of the month to collect the profits. That allows us time to work on a few more niche avenues of profit.

I mentioned that Dave sweated over a hot keyboard the other day. This is what he found: 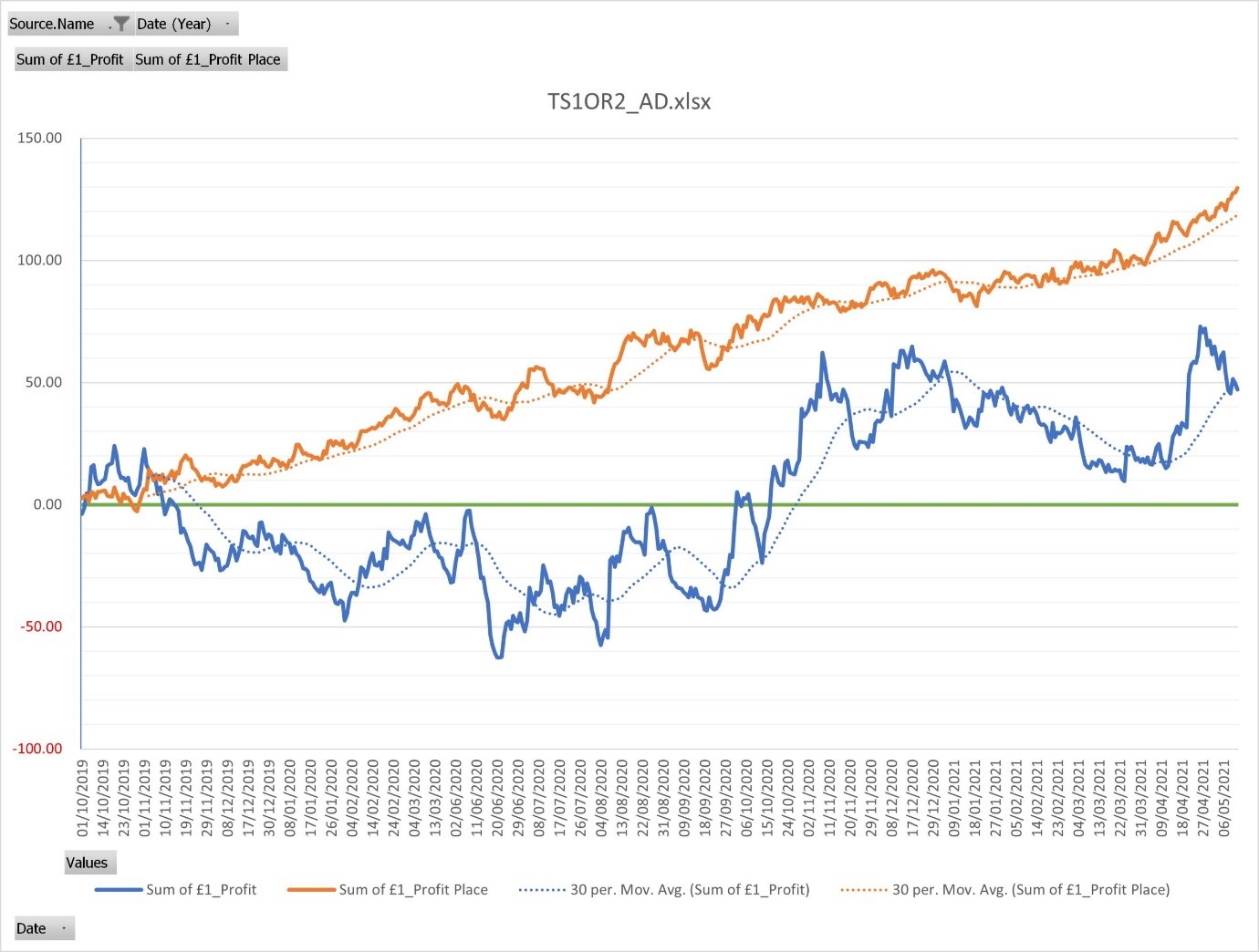 +130 points of profit in the place markets. It is actually deceptively simple with only 3 criteria but makes use of the new Place Odds Filter.

I went back through my suite of systems and selected this pit pony. 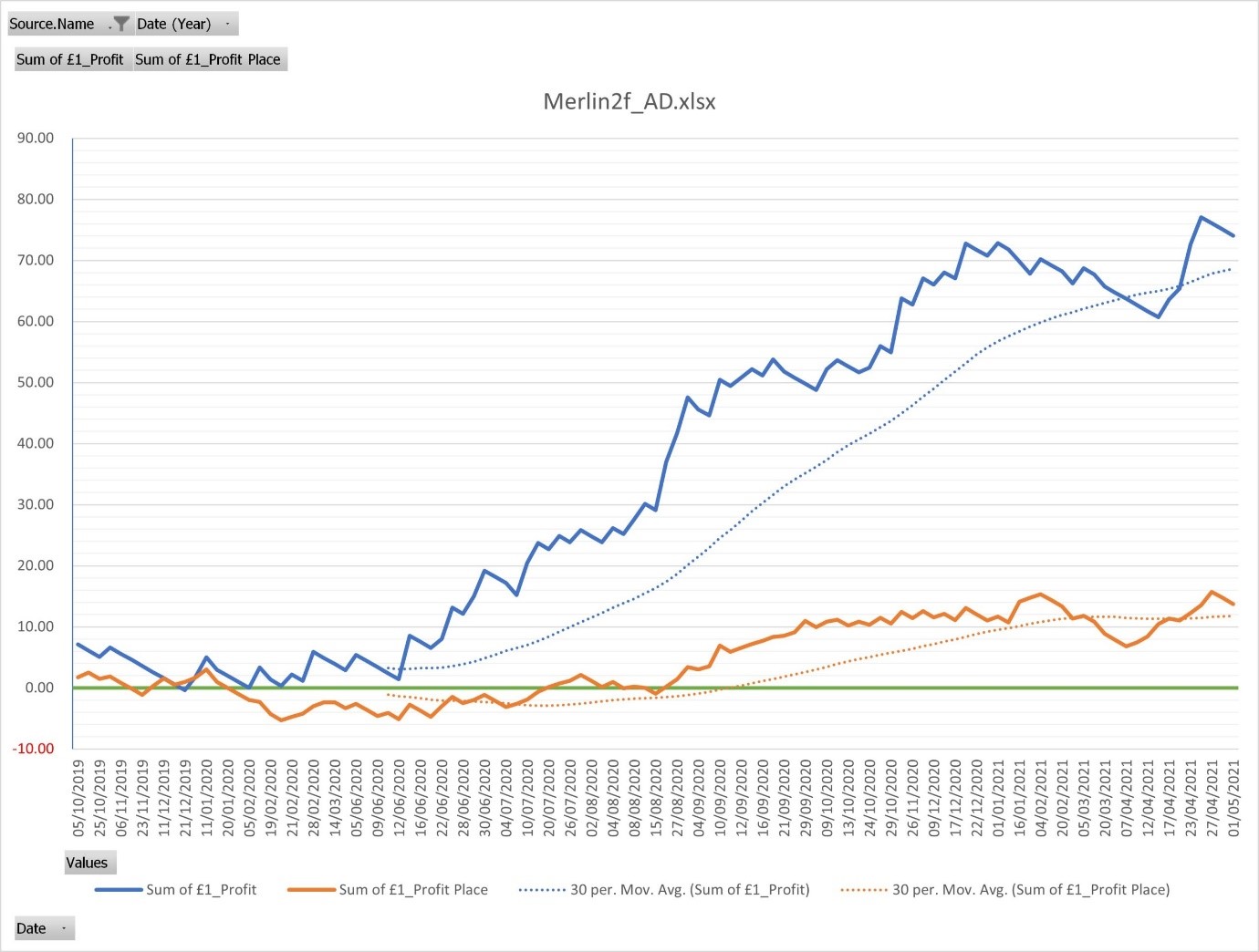 Not quite so impressive and it may need a visit from the vet but for now It should be okay.  I have been informed by Dave that both of the above are now live and available in TBM on the Preset Screen. The first one is called Non Handicap TS1 (Preset Number 32) and the second one is called Merlin2F (Preset Number 33).

I’ll call it a day for now. Let me know your thoughts and I look forward to some comments and seeing some of your systems!